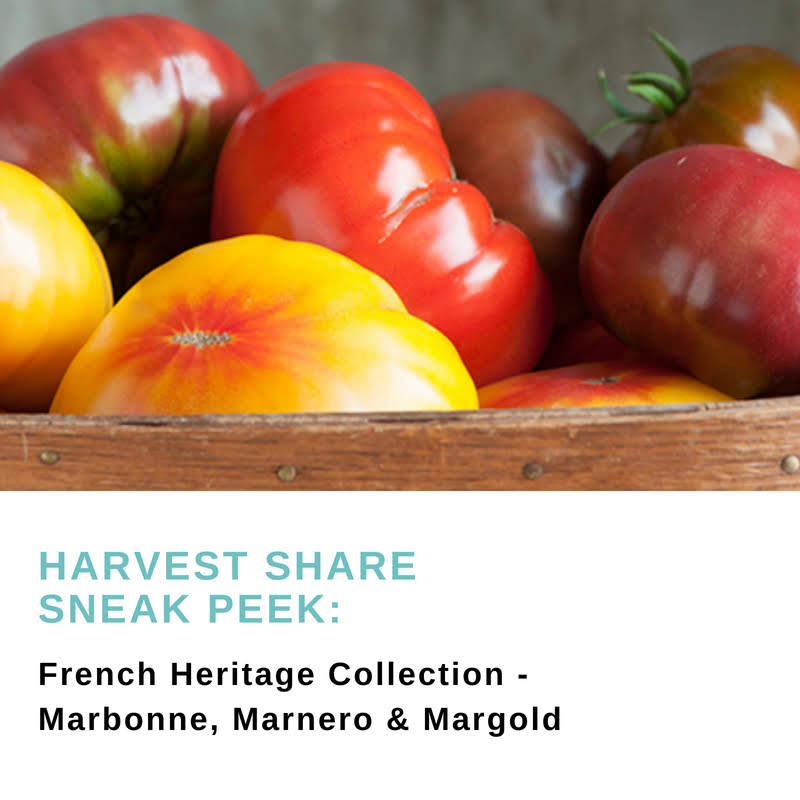 The French Heritage tomato collection promises to deliver the beauty and flavour of heirlooms with the vigour of hybrid varieties. Coming to the Harvest Share soon!

The tomato is native to western South America, not Italy, as you might have thought based on their importance in Italian cuisine.  When they were first introduced, Europeans incorrectly thought them to be poisonous and so were often grown as ornamental plants, for their beauty and not their edible qualities.  The popularity of tomatoes today is due to the overcoming of this initial prejudice and the cultivation of new varieties. Now they are eaten worldwide and are an important staple in many cultures.  Not all tomatoes are created equal: often there is a trade-off between flavour and other desirable qualities, such as yield, storability, and disease resistance. Recently, however, some cultivars that claim to combine the appearance and flavour of heirloom tomatoes with the vigour and disease resistance of hybrids have arrived on the scene.  At BCCF, we are growing some of these new varieties, including Margold, Marnero, and Marbonne; part of what’s called the “French Heritage” collection.

Our tomato plants are growing quickly in the greenhouses so you’ll be able to try these varieties and more in our Harvest Share quite soon! Visit blackcreekfarm.ca/produce to become a Harvest Share member.